This fall I am doing a fall blog tour of embroidery blogs. I send off
questions to the keeper of the blog and get permission to post a few
pictures of their work. I plan to do this up until Christmas, at least 1
a week.  Maybe a few more, 12 is a nice number to aim for, so that is
my goal! Each entry will have a list the full list of blogs in the
stops, so I will go back and add them to earlier stops. I don’t have all
the stops planned out yet, but if you are interested in being a stop, I
will entertain requests!

Stop 2: Isabell on Flickr, aka ColourinStitch
Stop 3: coming soon
Stop 4: coming soon
The next stop on The Floss Box Fall 2012 blog tour is Sew in Love by Elizabeth. 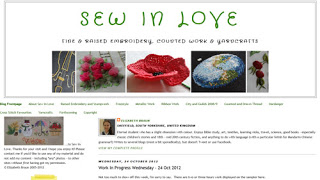 I’ve been a fan of Elizabeth for a long time now. She does a variety of lovely embroidery. Be sure to visit and follow her progress. She also has a number of useful tutorials on her blog.

1. How long have you been embroidering?

I
remember doing some embroidery as a child and even entering one piece
as part of my art GCSE exam at age 16 back in 1988, but then I didn’t
really do much with a needle for the next decade or more – except
working about two thirds of a printed canvas needlepoint in my mid-20s.
I restarted in about 2002 so, about 10 years now. 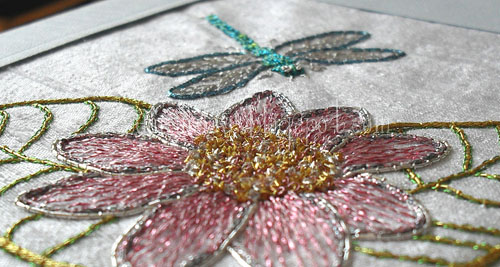 2. Why did you start?
I
was stuck at home all day with Chronic Fatigue Syndrome/ME and wanted
something to do.  An old Taiwanese friend had arranged for some of her
UK magazine subscriptions to be sent via my home and amongst them were
several cross stitch magazines.  I flicked through them and thought, ‘I
could do this!’  I got hold of some Aida fabric scraps and some old
floss from my mum and made a start.  Stitching was great therapy as it
kept me positively and creatively busy, so I had no time to fall into
the common traps of doing too much health research or feeling sorry for
myself.  Also, as most of the pieces I created were given to others, it
kept me as an active part of my own social circle – something that many
people who are ill at home feel the lack of. 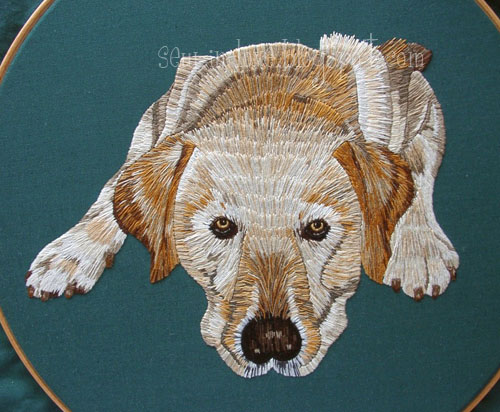 3. How did you learn?
I
started off following the instructions in one of the cross stitch
magazines.  Not long after that, I went to my first needlecrafts show
and bought a few kits and discovered styles like hardanger– especially
at the New Stitches stand and through their Stitch Direct catalogue.  I
ordered some materials and moved on to learning hardanger.  Soon
afterwards and with the help of some books I was beginning to buy, I
started out with a small freestyle piece.  I’ve learned many techniques
from books, kits and magazines.  Some I follow to the letter –
especially in the early stages of any new technique, and some I adapt
freely to my own tastes.  I also learned to branch out into more
adventurous work by taking some City & Guilds classes in 2008/9.  I
wasn’t able to finish the course owing to more health troubles and
moving abroad for a year, but I learned a lot just the same, not the
least of which being not to shy away from more contemporary techniques.
I feel I have a much broader range of skills and styles to choose from
thanks to those few months of classes! 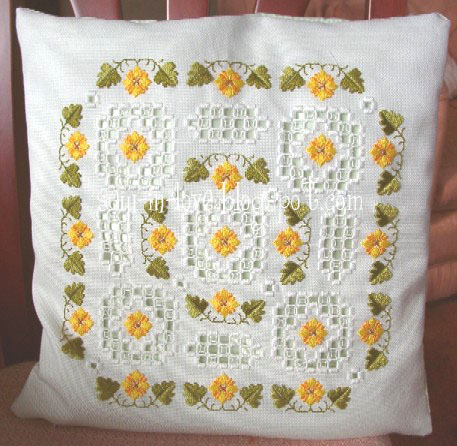 4. Which are your
favourites projects?

I
particularly enjoyed an old Royal School of Needlework (RSN) kit which
was my first exploration into raised embroidery.  It was supposed to be a
pincushion, but I couldn’t imagine anyone wanting to stick pins into
and ruin such a lovely piece!  It was made as a wedding ring cushion for
friends’ wedding but, sadly, didn’t make it in time – two weeks from
Britain to Ireland – crazy!  Still, it made quite an unusual gift for
them and I later did another small cushion as a wedding gift, this time
as a small heart.
Another
piece I’m rather proud of is a needle-painted dog that appeared in the
RSN Embroidery Techniques book.  It took a long time and got stalled for
a couple of years, but I was delighted with the finish.  It’s not
something I’d be in a hurry to do again as the monotony of working with
only browns and the occasional grey fought against my passion for
colour, but I’m glad I did it.  I prefer to work smaller pieces of
needle-painting these days, and only ones with a good selection of
colours.=)
Possibly
the most unusual piece was an stylised tree I designed and stitched to
be mounted in a large card as a leaving card on behalf of the whole
department when a former manager left.  Hanging off each of the branches
was something to do with his life, from the county he was born to the
one we were living in at the time, characters from the various languages
taught in the Language Centre we worked in and what I knew of his
hobbies and sports.  I was even able to use one or two stumpwork
techniques on it, which was a bonus for me as the designer.  The chap
was thrilled to bits with it and even mentioned it again well over 3
years later when our paths briefly re-crossed.
I
asked my husband this question as well and he mentioned some of the
cards I’ve done for him, especially a wild strawberry heart I did for
our tenth anniversary back in 2009. 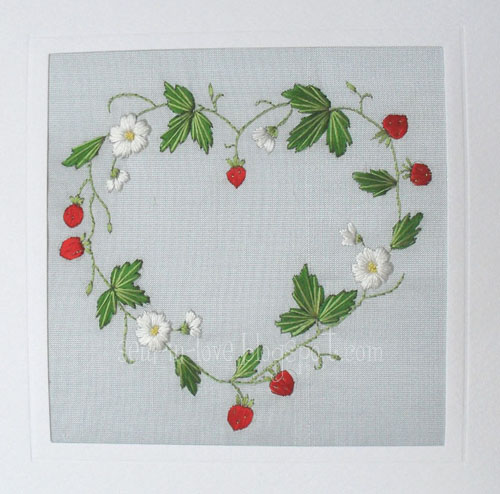 5. What do you do with all your finished projects?

Most
are given away as gifts.  In fact, most are intended for the person
concerned before I even start (or buy, sometimes) the design!  I work
better with an aim in mind and, if possible, a deadline.  As my husband
often says, a deadline is a great motivator!!  There have been several
wedding gifts, anniversary things and so on.  I’ve also done numerous
small pieces for greetings cards (more than 80 so far) and others made
into things like bookmarks, needlecases, cushion covers, a manicure case
and even a key ring fob as part of an anniversary gift to my husband.
He also has a small collection of cards for anniversaries and
graduations – he seems to collect degrees like some people do
postcards!!
We
also have some of the cross stitched pictures that I’ve done hanging up
at home and, at time of writing, we’re in the process of framing a
number of other things ready to go up.  I take care of stretching and
lacing the piece over a board and Sir takes care of any cutting needed
for the mount and putting it all together. 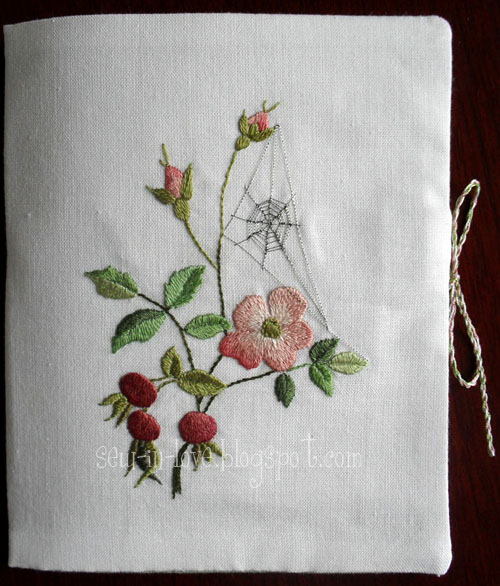 6. What are your favourite styles of embroidery?
I
love stumpwork and anything with a dimensional aspect.  I also enjoy
small pieces of simple ribbon work (dimensional again) and also
sometimes just enjoy relaxing with a relatively simple technique like
cross stitch – which is often great for creating pictures.  Most things
really! 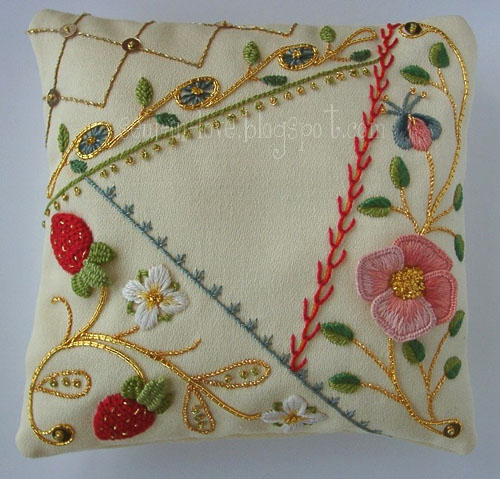 7. How many hours a day do you give to your embroidery?
That’s
a difficult question to answer as it can range from none at all to
three or more.  It depends on how I’m feeling, how much I’m enjoying
what I’m working on (I can get ‘stuck’ for quite a while when I find a
piece rather more a nuisance than a pleasure to work), when it’s needed
for and also what else is going on in life – from being busy with other
commitments to finding other things more interesting at any given time.
So really, there’s no average time per day, or even per week.
Sometimes a week or more can pass without my touching a needle and other
times I’m stitching avidly every day. 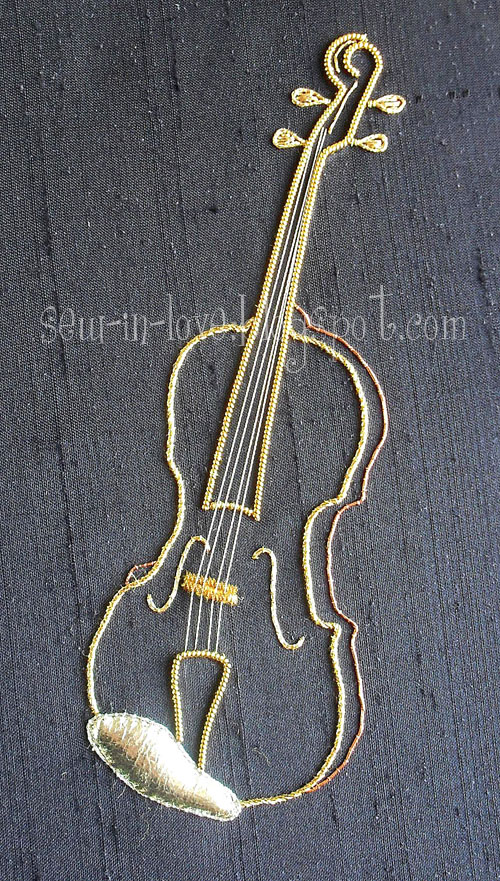 8. Do you have any other hobbies?
Lots!
I’ve recently got quite into knitting and plan to take up crochet too
soon.  I also love reading and have several books on many topics on the
go at any one time.  Just now I’m reading two different Bible
translations, the mammoth 18th century novel ‘Clarissa’, a
book on the relatedness of Western European languages and how to exploit
that in learning them, and a 1930s kid’s school story, to say nothing
of several study texts – sciences, Chinese, German, Spanish,
linguistics, English studies etc!  I also love to travel and use my
languages, but we rarely find the funds for that these days.

I’m
keen on music too and have fits and starts of trying to learn to play
the viola (which I also did a goldwork piece of).  I’m not having
lessons just now so it’s hard to stay motivated and I also enjoy
paper-based arts and have recently blown all my ‘pocket money’ on some
good quality watercolours and oil pastels.

I hope you enjoy reading about Elizabeth and be sure to go check out her blog. Thanks for participating, Elizabeth!